Skip to content
Search
Home > Blog > Business Success Will Come and Go, But Integrity Is Forever.

Integrity is Important to Business Success

If I could teach a single value to live by, it would be about integrity and how it ultimately can determine your business success. Business success will come and go, but integrity is forever. Integrity means doing the right thing at all times and in all circumstances, whether or not anyone is looking. It takes having a moral compass and the courage to do the right thing, no matter what the consequences may be. Building a reputation on integrity can take years, but it takes just a single moment to lose it.

in·teg·ri·ty
1. The quality of being honest and having strong moral principles; moral uprightness.
2. The state of being whole and undivided.

Integrity and accountability are in short supply when dealing with a great majority of the “digital marketing” industry. I don’t even like using the term “internet marketing” anymore because of the negative connotations it brings. But, there is a large number of people who are legitimately using the internet as a tool to reach people, and have effectively learned to market via this medium.

When one of those people suffer a lapse in credibility, it’s a cause for concern. When several people go completely off the reservation, and pass along misinformation, then it’s worth writing about. This is just what happened leading up to April 30th, and the Facebook API changes that took effect that day. 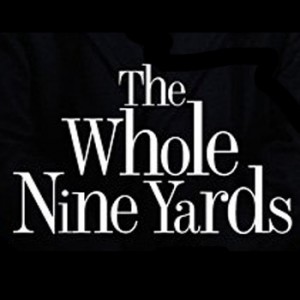 We first wrote about this Facebook group rumor the week before the effective date in a post titled “Did You Fall For It? You’re in Good Company“. If you have not read that article yet, then please read it first so you can grasp the full gravity of what has transpired.

In that article, I discussed the dangers of not getting all your facts straight before going public with a story and the consequences it may have on your business success. If this rumor had simply gone away after that, or if the people who were referenced in that post had issued some sort of statement saying they were mistaken, that would have been the end of it.

As you can probably guess, that was not the end of it. The very existence of this article suggests otherwise. As it turns out, one of the apps mentioned in the previous article decided to handle it a different way.

Facebook themselves never stated that third party apps would be blocked from posting to groups. As a matter of fact, their public page detailed changes that included updates to their groups API. So why would Facebook update something they were deleting anyways? The simple answer is, they weren’t planning on stopping third party apps from posting to Facebook Groups. Anyone who had suggested otherwise was either lying or just had not done the proper diligence to confirm it first. Does that display business success in itself? The majority of the people who helped progress this rumor are some of the people we call our leaders and who we follow. Some hold tight to every word that comes from their mouth’s as if it is the “holy grail of digital marketing”, priceless gems or gold. Now is that good for business and their overall business success when they start losing credibility? 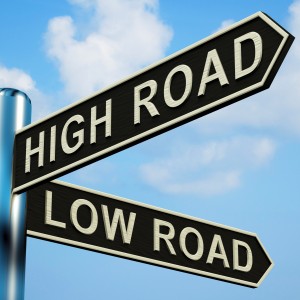 Given that it was a rumor, not founded in truth, you would think that many of the brands who publicized it would come clean with their audience since it’s good for business and their own business success. They could have let people know that they received bad information. Right?

The first example given in my previous post was a copy and paste of an email from Post Planner, a well known third party app that aids with content curation. If they had left it alone, I would have too. But, when they play off what was bad intel to make themselves look like “the savior of the app world” or “messiah of business success”, that’s just bad business and it’s time I name names.

In an email I received on May 1st from Joshua Parkinson of Post Planner, rather than him saying, “Oops, it looks like we received bad information. Group posting is still working”, he cooked up this scheme instead. 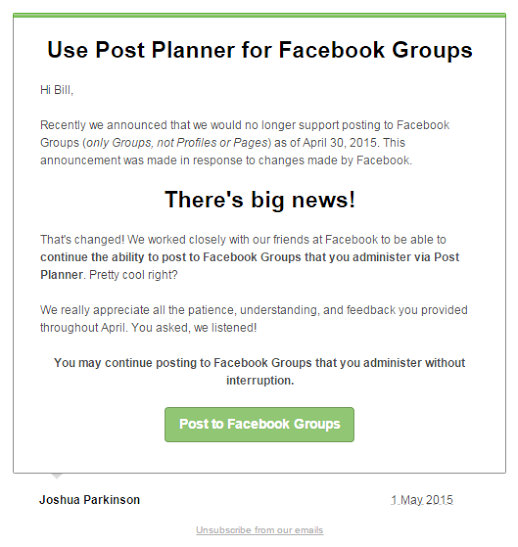 Keep in mind this is the day after the change was suppose to have taken effect. Wouldn’t it have been better for his future’s business success if he had just been upfront with everyone and had enough integrity to be honest? A quote comes to mind, “The integrity of men is to be measured by their conduct, not by their professions.”

Well before April 30th, Joshua’s rumor had spread all over the internet. Even friends of mine had picked up on it and shared posts on Facebook from others who had been sharing this “news story” too. It managed to whined up on the desks of some of the biggest names in the industry.

Mari Smith is very well known for her expertise in Facebook marketing. So, when she also shared this in a Facebook Post (below), who wouldn’t take it seriously? For someone who is a keynote speaker at Social Media Marketing World to be taken by misinformation, it must be pretty convincing. She even quotes several sources, but all were other third party apps.

I wouldn’t go as far to question Mari Smith’s integrity, but she is seriously lacking in diligence. I can’t stress it enough how important integrity and perception is to your reputation. These are instrumental in business success and staying successful, let alone not becoming perceived to be an architect of socially misguided information.

The part that really got us thinking, before we wrote about the pending changes, was that not a single person cited an official link to Facebook as evidence. A little searching showed why. There was NO official statement from Facebook claiming such a change, because the change was made up. Facebook updated their API, and April 30th was the day it’s changes rolled out, but there never was any mention from Facebook about cutting off app access to groups.

The Facebook Platform Update page even states how the groups API is being updated. Why would they update something that was being removed? Sure, there were a lot of changes to the way apps interact with Facebook, but the ability for apps to post to groups is still very much available and working today.

Take a look at this screenshot. Note the date as well as the word “fzoom” just under Jason’s name. That is the app he used to post his message to our group Post-Promote-Profit in the same way such a post was supposedly not going to be possible. 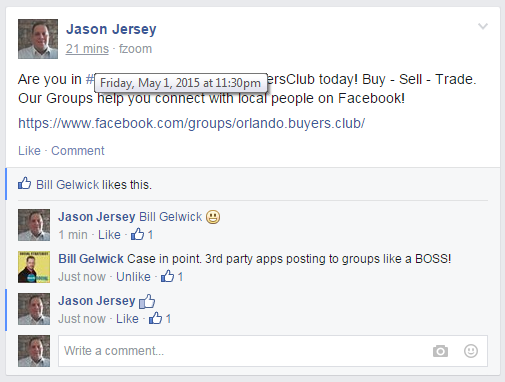 Of course, we had done our homework already, so there was no surprise when posting continued to work. We would have been completely shocked had the app stopped working.

So what have we learned today? Just because you read it on the internet, it doesn’t mean it’s true. Apparently, the source has little to do with the truth either since it seems most people can be fooled. We live in a world where integrity isn’t talked about nearly enough. We live in a world where “the end justifies the means” has become an acceptable practice for far too many. Just remember, it is best to go to the source. Be careful what you pass along to your audience that you have not verified yourself. I personally would never publish a single update or blog post about a change to someone else’s service without first making sure I independently verify it myself and I suggest the same for you. If you can’t see how that play’s an important role in your business success, then I am almost at a loss of words.

“Wisdom is knowing the right path to take. Integrity is taking it.” -M.H. McKee.

What are Your Final Thoughts?

Do you have a similar story of a rumor you spotted online? Does the rumor pertain to your business success and others? We’d love to hear from you within the comments section below.

Help us Spread the Word

We would appreciate it if you would help let others know about this post and the false rumors being spread all over the internet. Please share this post with your social circles via the handy share buttons below. And, if you want to stay on top of what is REALLY happening in Social Media, Subscribe to our Weekly Newsletter.