I’ve been around this internet game long enough to see many trends. For starters, Hype fades. It never leads to long term results, and rarely even short term ones. Help is a winner, as long as it is sincere.

Don’t believe me that hype fades? Take this example. One of the QnA style podcasts I enjoy, the Ask Garry V Show, had  question about this just the other day (4/7/15). The question was on balancing the highs and lows in motivation, particularly after attending an event. The person asking the question had been to a major networking event, and then was having a hard time dealing with the low afterward once she got home and back to “normal” life.

Of course, Garry was a good one to ask since he is always amped up. The guy seems to only have one speed. But, for most of us, this can be an issue. We get on a major high from the hype, then once it fades, we feel like we are hitting a major low. In reality, we have only come back down to a normal level, but comparatively, it seems like a low point.

I’m one of those that doesn’t care for such events simply because of the hype. It’s artificial, contrived, and serves little purpose beyond the time you are there. I went to some of those big RAH RAH events back in my early days as a network marketer (in the mid 90’s), and it was great at the time, but that high wears off quickly.

This is mainly because it’s just a show. Little of it is actually real. Those people (usually) don’t maintain that energy level when they are not on stage. It is much like watching a drama on TV. You can get all wrapped up in the moment, your heart rate increases, and you get all into the story. 5 minutes after the show is over though, you have moved on with your day, and the effects of the show have faded into memory.

I don’t want to be too critical of such events. I’ve always learned a few new things when I went to them, and the chance to network is invaluable.

When you help someone learn something new, that doesn’t fade. That is knowledge they can carry with them for a lifetime. As stated previously, you can learn a lot at conferences and workshops. There are also many other avenues for learning. For me, being able to help someone start to see results in their business is one of the most rewarding things. Just seeing that light bulb go on over their head when they “get it” is a real charge. 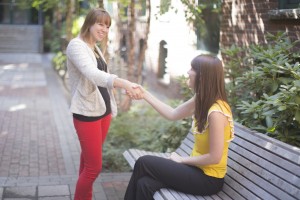 That’s why we operate several Facebook groups. The first, Posy-Promote-Profit, was originally a place to send spammers from our other groups, but developed into a highly active community.

The most recent group though is the Much Coaching Mastermind group. It has spawned from the previously mentioned group, as a place where those who are serious about their business can mastermind together, share ideas and strategies, and help each other grow to new heights.

While Hype is fake, Help is real. Real help that is. Hype gives you an artificial sense of excitement. That’s why it fades, but when you receive genuine help it can add a real boost to your business, relationship or whatever area of life.

Sure, there are those who profess to help but have ulterior motives. Fortunately they are fairly easy to spot. If someone is putting considerable effort into messaging people to offer their help, then you can bet they have more of an agenda. This is often used as a marketing ploy in an attempt to recruit people into network marketing companies.

But when you find someone really helpful, that’s priceless. I can show you several of those people. Simply go to the Much Coaching Mastermind Group on Facebook and request to join. It’s a fairly small group, but everyone there is serious about growing their business the RIGHT way. Come learn and help others with us.